The Lidl Breakfast Run – Caroline Cutliffe confounds other runners as she completes her 20 mile goal… in a 16.2 mile race…!?! Read on…

Posted by craigbowlesmtb on March 27, 2017 in Race Reports
What a Sunday to do an 8:30am race!!
Between Mother’s Day (no breakfast in bed)! but more to the point, the clocks going forward (that was cruel!), it was an interesting start to the day.
5.30am wake up; out the door at 6.15.  Made myself eat breakfast!!  As the sun came up on the M3 – picture it now(!) I contemplated what I was thinking when I said I was going to run the London Marathon – a moment of Irish madness, and there’s many of those!  It seemed like a good idea at the time; a year ago when one gets caught up in the excitement of medal hanging and you pop that little piece of paper into the ballot box outside the portacabin on the mall.
Anyway, got to Kingston in good time but found myself going round the one way system about 10 times, not to mention a one way street in the wrong direction,  trying to find the car park!  A bit flustered at this point, dropped off bag and checked if I could change my distance from 16 to 20 to which they said no.  So there was nothing else for it but to get in a couple of miles before race start.  Managed to do two miles with the lovely Hannah Glaister and back in time to join the back of the race, which suited me nicely. 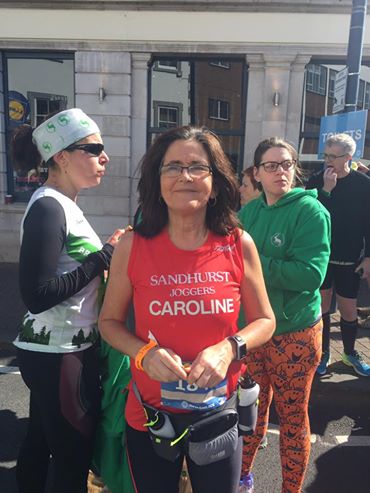 For those of you who have not done this race before, the 16 miler takes you on two laps from the market part of the town, along the river to Hampton Court and on towards Esher way on the main road with a final left turn back into Kingston for the last 3 miles on the other side of the river.
So for the first lap, ran for bit with Hannah and some of the jolly Bracknell Forest ladies, then spent a couple of miles with Alurie who was out on the 8.2 route. The atmosphere was really lovely with lots of  random chatter with people settling into the race,  before we knew it, one lap was nearly done.
Back into town to start the second lap, over Kingston bridge and out along the river again heading to Hampton Court Palace for the second time.  This lap was interesting –  I ran alongside a young lady (much younger than me – well, most are!) and she was singing at the top of her voice a rendition of Cher’s “Do you believe in life after love?” to the amusement of some Japanese tourists. Do I believe in life after love??  There was only so much of that I could take so I tucked in behind (not literally – wishful thinking!!) a very nice man for a few miles who was doing the same pace as me, and who kept looking behind to make sure I was still there – yes really!!
The sun had come out and people were smiling!  Then it dawned on me that I had to find another two miles somewhere before crossing the finishing line – something I had intended to so earlier on in lap two, but between Cher and my man friend, it didn’t happen so at about 18 miles, I decided the only thing for it was to do a U turn and head in the other direction  (not the first time today!!) to the confused faces of runners coming towards me nearly home – you know what it’s like; you have done it yourself – ran up and down your street passing your front door until you garmin tells you have done the exact distance you set out to do!  That was me only I was going up and down the towpath like a woman possessed looking at her watch! 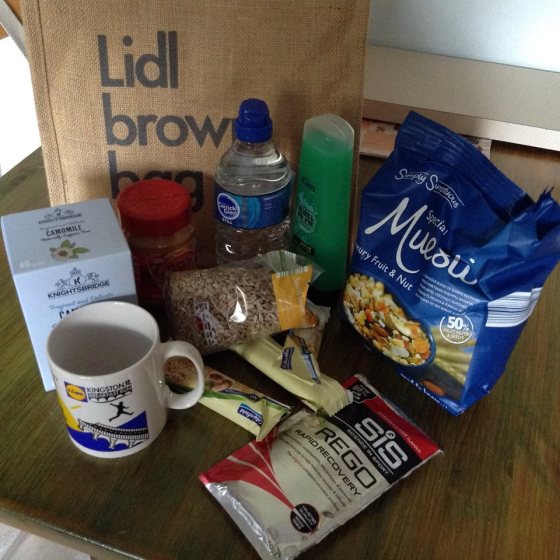 With a mile to go, I felt good and as I turned the corner onto the cobbled stones towards the Lidl flags (lots of them!) and a sea of green Bracknell Forest Runners (lots of them), I knew that I now had 20 miles in the bag and a chance of getting round London in one piece in a few weeks.  I finished to a raucous cheers from the Bracknell Forest gang , a Lidl Bag for Life! – not any old plastic bag, and full of random goodies but most of all, a big smile on my face.
What a day!!!