Posted by craigbowlesmtb on April 25, 2018 in Race Reports

Twas the middle of the night, therefore a marathon must be happening, The London Marathon as it happens.

It was nice to leave the house in daylight for a change, to meet my fellow runners at Sandhurst Library and board the bus to the start areas.

The weather promised to be a hot one and was already quite pleasant at 0630 hours if only we knew what was to come.

I completed the London Marathon a couple of years ago and pulled a glute at mile 8, so this time I only had knackered legs and shredded feet to worry about, so that was okay then!

We all arrived at the start to much excitement and chatter and then went to our separate starting areas with shouts of “good luck” and the like. I was with Sarah Hyatt and we met up with Lisa Hale at the Green start, eventually after the queue and bag search, first stop the toilet, some things never change no matter how many marathons you have completed.

Some changes have been implemented this year so that each start area has assigned waves to lessen the congestion at the start so since Lisa and Sarah were in Wave 4 and I was in Wave 8. I had to content myself with an ice-cream, a tree and a man wearing a beer can, which he put on the ground and I mistook it for a bin and tried to put a water bottle in it, much to his anguish.

By this time it was very hot and the drink I had brought with me was also getting hot, but not too long to wait until we were off.

I decided to take the first half steady, as it was getting warmer, and I do not like running in the heat and this is the tactic I stuck to, which was a good idea as I was coming across people walking from mile 8.

There were water stops every mile and although I don’t usually take any water on board until about 8 miles I thought it might be a good idea, the drink I had taken with me was finished by mile 10 and so hot it had become; all it needed was a teabag.

The first half completed, and the local anesthetic I had used on my toes holding out, off I went for the second 13.1 miles.  By this time I had given up with the mile markers and was running from water station to water station, walking and drinking as I walked, then off again to the next one. What I did not drink I poured over my head, just to try and stay cool. There were showers on the course but were a bit ineffective giving only a mist, whereas the fire-stations were great and had their hoses going full blast, since most of us felt like we were on fire they did the job.

By this time people were dropping like flies, there were so many people lying by the side of the road being attended to the St. John’s ambulance first aiders, it was a sad end to their marathon journey, especially any in the finishing straight. 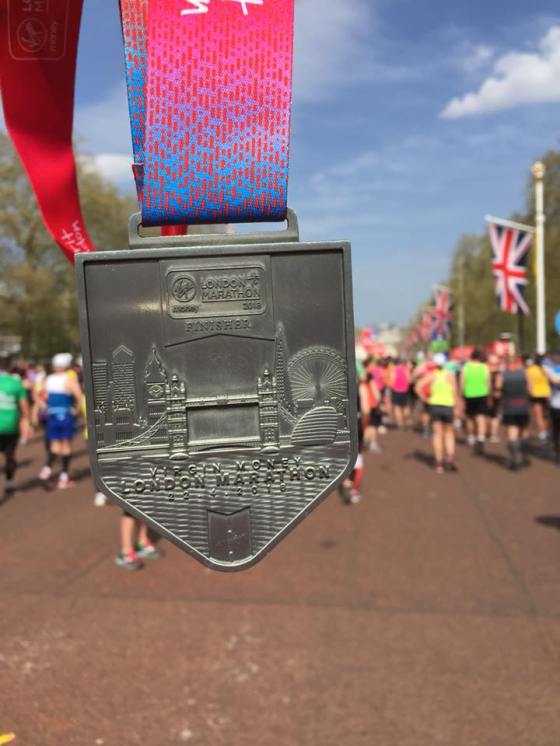 As I crossed the line I heard a familiar voice belonging to Ian Watson, a sight for sore eyes (and everything else) we had a quick chat and caught a girl who staggered over the line. I am sure he saw many desperate souls cross that finish line during the hottest London Marathon ever.

After a quick change it was off to get the underground to Waterloo and then the train to Fleet. Just as I was settling down for a “power nap” I was joined by Paul Biggs, his family and then Lisa and Stuart so a right little gang we became reliving the day’s events. Despite the weather it was a great marathon, the crowds were many deep, even in some of the remote spots and they could not have been more vocal, I really enjoyed my day, despite the heat, and since I have achieved my good for age time this year, I will no doubt be back next year.