Posted by craigbowlesmtb on April 28, 2018 in Race Reports

In April 2017 I received my largest race number yet, disappointingly 48hrs before the event I found myself withdrawing through injury. As a result the best part of a year in advance, I found myself registering for the Southampton Half Marathon with a feeling of unfinished business. I have to say a year as a club runner is a long time to wait for an event you were so looking forward to.

Fast forward one year and I woke before the alarm at 05:45, I guess the excitement had simply become too much. I struggle to imagine how those heading into London on the same day even managed to sleep. At 06:55 I arrived in Farnborough to collect who has now become my wing man, Nigel Evans for the short and somewhat quiet journey down the M3. Entering the city I became a little concerned that maybe we were trying to park too close to the start as there were runners walking in from a couple of miles out. Despite this we continued the journey and found what I believed to be the perfect multi story within yards of the start. Heading up to the 8th floor spaces were plentiful, we later discovered this to be a mistake as access was via stairs only!

Arriving at the race village the sun was shining and atmosphere beginning to build. With very little to do for 1 hour we toured the village and headed off to the toilets in hope of beating the queues, little did we know but this was probably the busiest event we’d both taken part in. Suitably relieved and bags dropped we headed off towards the start, unfortunately the masses had assembled before us and the organisation appeared to be poor, yes you’ve guessed it, it was a free for all and we found ourselves somewhere in the region of 500 metres from the start. With no pace markers people were simply lining up with no consideration to anything other than getting started.

At 09:00 the race was under way and we started the slow walk to the starting mats, over these we broke into a gentle jog and headed off down Southampton high street. Twisting and turning, through bus shelters and around monuments it was a slow start as runners and none runners hustled for position. Difficult to get into a pace it was barely surprising when I took a tumble at 3 miles as I jumped for the pavement in hope of avoiding another runner who closed a gap. Down like a sack of potatoes I was quickly back to my feet and on with my running. Within a couple of miles my wing man thought it would be useful to allow me time to check out my injuries, he headed to the hedges for another toilet stop, I couldn’t help but think that this is going to be a long run as he hadn’t drunk anything since getting in the car at 07:00. To date it hadn’t been the best of runs, it became even more challenging as we reached the sight of the Itchen bridge. Like ants heading off up a hill all we could see was a swarm of heads and hats bobbing up and down as they headed to the summit. With some amazing views, it surprising to note that all we could hear was people around us moaning about the climb (I’m sure Nigel was one of them!), it surely had to go back down the other side, and so it did. To the disappointment of many a couple of miles later we had the honour of running the bridge and running it in the reverse direction, I’m sure there are many that never want to see it again. 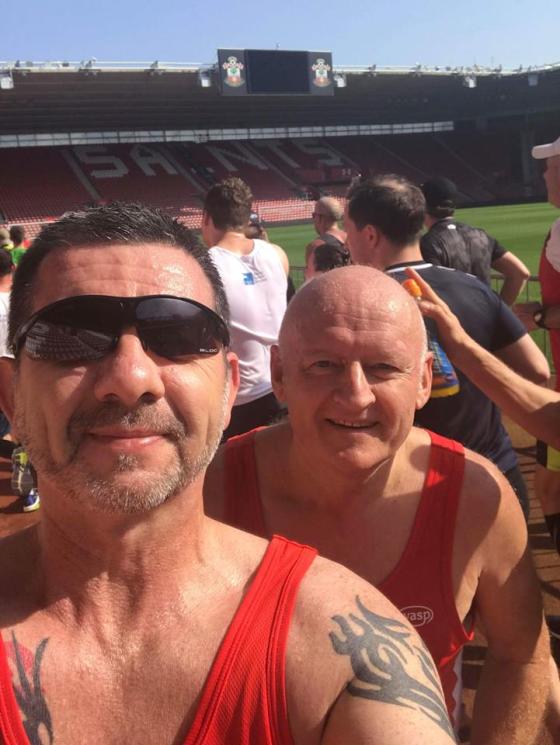 Continuing on we arrived at one of the features of the run, St Mary’s Stadium, home of the Cities Premier League (well, for this season at least) football club. As temperatures were rising and the race wasn’t going to bring spectacular times we decided to pull to one side and take advantage of a photo opportunity. Reaching somewhere in the region of 9.5 miles the organisers treated us to another delight, a hill that appeared to continually climb for about 1.5 miles, needless to say it was disappointing and concerning to note those suffering as a result of heat exhaustion lying on pavements receiving treatment from what appeared to become a busy team of marshals. Over the top and through 11 miles my wing man found his second wind and decided to increase the pace, this came as a total surprise and I found myself digging deep to stay with him in a hope of getting in under the 2 hour mark. With just under 1 mile to go I could hear the guy in front of me talking to himself, it wasn’t until I drew level I realised that he was doing the Sunday morning norm and preaching to those around him. Needing to make an escape I put my foot down, caught up with Nigel and we headed for the finishing mat. Coming in at 1:57 we were both delighted, looked at each other and without debate safely concluded that it was a city ticked off a list that we’d never return again. 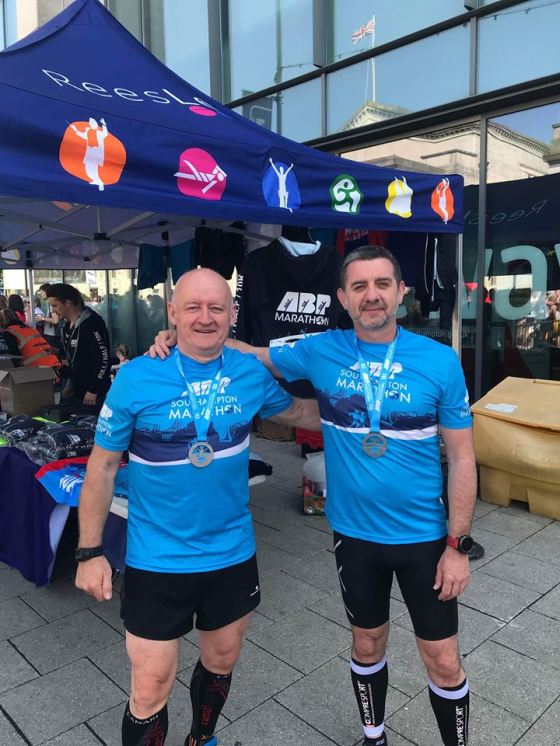