Edinburgh Marathon – Sharon Burfield tells of her adventure in Scotland

Posted by craigbowlesmtb on May 31, 2018 in Race Reports

When Alison Jones suggested running the Edinburgh marathon, I jumped at the chance!  We planned our flights, and Alison booked the accommodation.  In the meantime, I became injured, and then ran London.  After some physiotherapy and a few visits to a sports podiatrist, I was back to training properly, in preparation for Edinburgh…

In the weeks leading up to Edinburgh, we had a few last minute changes to flights, but were all set for our Edinburgh adventure! Although, when chatting to Erol at the Lookout one week, I discovered I really had no idea what was going on!  Thankfully, Alison had already sorted our bus tickets for the journey back from the finish and had everything else in hand too, so I didn’t have to worry!

I flew up on the Saturday evening, quite enjoying the peace and quiet without my boys!  I arrived at the airport and made my way into the city centre, where the lovely Alison was waiting for me.  A short walk away from the Tram stop was our beautiful studio flat, with stunning views of St Cuthbert’s church and Edinburgh Castle (or so Alison said, as it was dark and very misty when I arrived!)

Once I had unpacked my (very minimal) bag, we settled down with a glass of wine, and chatted about the race, and the weather (was it going to be as hot as London?????).  Finally, after a couple of glasses of wine, and some snacks we went to bed around 11.30pm (this is VERY late for me!!)  Being in the centre of the city and opposite some rather nice pubs and hotels, it was really very noisy all night, so we didn’t have the best night’s sleep.  Anyway, our alarms went off at 7am and we quickly got up and ready for the big race.  A quick look out of the window told us it certainly wasn’t going to be too hot (the castle was still behind quite a bit of mist!)

With Alison being a seasoned marathoner, I went along with all of her suggestions; including us only using one bag (we were all to regret this later!)  We headed out down the road to meet Wayne and Andrea and were soon at the start, having picked Phil up along the way.  After the obligatory SJ group photo, we went our separate ways to visit the toilets and drop off our bags.  It quickly became clear that there weren’t really enough toilets, so Alison and I joined the back of a very slow moving queue and hoped for the best!  Whilst in the queue, Erol found us (in his Macmillan charity vest) and we all bemoaned the very cold, damp, misty morning!  Thankfully, Wayne was able to drop our bag off, as we were still in the queue for toilets at twenty to ten!

Finally, Alison, Wayne and I made our way to the orange start (Alison and I still huddled in our space blankets) and only had to wait a few minutes before the announcement for the start was made!  We had a nice gentle walk to the start line, and then set off together…

Many people had told me that the start was downhill, and this was rather welcome!  After the first mile at a steady pace, I couldn’t help but get carried away with running, and found that I had already left Alison and Wayne…  The temperature was actually really lovely for marathon running and I really enjoyed running through the city centre, although I never actually saw Arthur’s seat; I think it was hiding in the mist!

The first half seemed to fly by, and I knew I was probably running a little too fast! But hey, I was enjoying myself!  Much of the course was along the coast, so there was a welcome breeze for most of the run.  However, once we got to about mile 16, there was a very long stretch of road, where you could see the front runners heading back towards you.  This seemed to go on and on, and I was desperately wishing to reach the turnaround point! 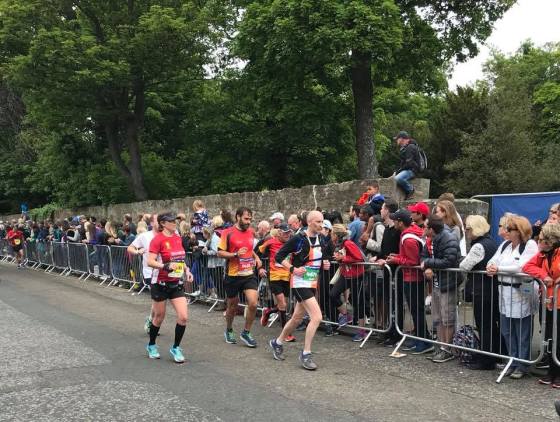 Once I got to the turnaround point, I was starting to tire, but knew I was on the home stretch.   It was shortly after this, that I saw Wayne who looked in good spirits! There was great crowd support in parts, and I especially enjoyed the bagpipes and Brazilian dancers around this point!!

I trudged my way through miles 20 to 23, and had a look at my time..  3hrs 10mins..  I knew I could probably get a PB, so just told myself to dig in!  Those last three miles were tough, but the crowds were great and I just kept telling myself I could do it.  I also kept looking at the runners on the opposite side (who were still at about mile 14) and thinking ‘at least I’m not there’!!

With a couple of miles to go, I spotted the very last runner with the sweeper van behind her…  I gave her a wave, and kicked myself up the bum!  I counted down in my head until I got to the final turn, and pushed over the finish line!

I collected my lovely medal and goody box, and then headed over to collect the bag.  Alison and I had planned that whoever finished first, would collect the bag, and then head back to the finish to see the other person over the line.  What we hadn’t factored into this, is that Alison would also be running pretty quickly! 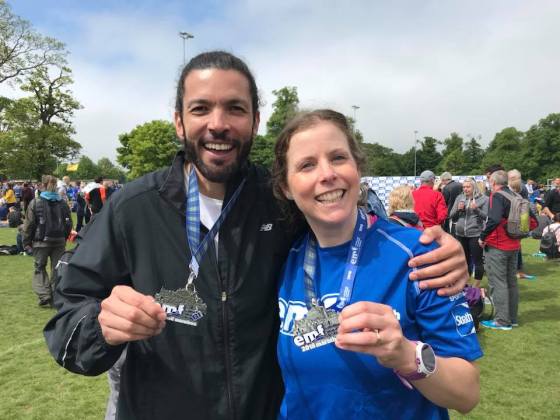 I picked up the bag, put on my finishers t-shirt, and started to head back to the finish.  At this point (by some miracle!) an old friend spotted me and stopped to say hi and take a few pics!  After this lovely reunion, I headed to the finish.  I walked around a bit, and then thought that perhaps Alison had already finished and might have headed over to the baggage collection point, so back I went..

Once there, I found Phil Turner, who told me that Alison had finished just ahead of him…  I then found Erol, relaxing on the ground, and asked if he had seen Alison.  This was the start of ‘the big search’…  From this point on, both Erol and I were looking around the finish areas for Alison to no avail…  Unfortunately, Alison did not have her phone on her (it was in the bag!!!), so we had no way of getting in touch.  I messaged Andrea and Wayne to ask if they could bring Alison to me if they were to see her.  After a short wait, Wayne and Andrea joined the search.

Despite wandering all over the place (with some of us staying at our agreed point) and leaving messages at the help desk, we still couldn’t find Alison!  After a couple of hours, I started to think that maybe Alison had decided to head back to the bus and home, so Andrea and I started the long, hot walk to the buses.

After a slight delay waiting in completely the wrong queue, Andrea and I finally got on a bus, which we thought would take us back to the start.  During the journey, we talked about the race, but also about where Alison might be.  I was really hoping she would have made it back, and was sending messages to all sorts of places in the hope she might get one eventually!   We finally arrived back in Edinburgh, nowhere near the start, at about half five!  At this point we went our separate ways, and I started on my 30 minute walk back to our flat.

Once back at the flat, I had a quick chat with Wayne and Erol, who had been in to use the facilities!  We were all starting to get rather worried about where Alison was, and if she was OK!   They left to get to the airport, with strict instructions that I was to let them know as soon as Alison was back!

Once I was alone in the flat, I tried to see if there was a number to contact the event organisers, in case Alison was still at the finish…  Sadly, there were no contact numbers!  So, at this point, I decided I should call the local police as I didn’t know what else to do!  Following a long conversation, having given all Alison’s particulars to the lovely police team, I decided to shower and wait.

After a lovely shower, I pottered around for a bit, and then heard the door go – Alison was back!!!!!!!  Poor Alison had waited at the finish line for four hours, and had then managed to get the bus back (without her ticket, as that was, of course, in the bag!).   After a quick hug, I had to call the police to let them know she was OK, and Alison was able to revive herself.

Now that we were together again, we could begin our celebrations!  Both of us had achieved good times, and could now relax with a glass of champagne, before heading out for a well-deserved dinner!

You’d think this was enough of an adventure for all of us, but it turned out more was to come!  Poor Wayne and Erol’s flights were very delayed on the Sunday night, with both of them not getting home until the early hours of Monday morning.  Alison and I had planned to get up early and head to the airport together around 7 am.  However, when we woke up at 6, I had a text message telling me my flight was cancelled!!  After a panicked few minutes trying to get through to the airline, I finally had another flight sorted, but from Glasgow!

Anyhow, we all made it safely home, with a few more tales to tell.  Edinburgh is a lovely city, and the marathon is a good one – nice and flat, with some beautiful scenery.  I would heartily recommend it, but I would also suggest you have your own bag and your own phone!!!