Posted by craigbowlesmtb on August 20, 2018 in Weekly 'Run Down'

The week started at pace with Eddie Wilson completing the Ramsey 10k on the Isle of Man in 54:12.

Jumping onto the weekend; A bumper Saturday of Parkrun action. With Rushmoor cancelled this week Frimley Lodge was bursting at the seams with 667 runners celebrating on the retro course with the original finish! Of the 14 SJs Mark Pattrick was first to finish as he returned from injury to post his fastest time of 2018. He also ran the course at a similar pace earlier in the week in his first pain free run since injury. Jon Payne, KJ Kajla and Jim Casey also recorded seasons bests while Mo Wilcox, Bev Mathews and Kirsty Darcy sampled Frimley for the first time. Congratulations to John King who completed his 150th parkrun!

Plenty of PBs over at Parkrun Bracknell where the SJ turnout matched Frimley with 14! Jill Pemberton lowered her PB by over 3 minutes to 38:50 while Liz Ujszaszi knocked nearly 2 minutes off her Bracknell best. Paul Biggs also improved for the second consecutive run at the Great Hollands course as Alistair Ingall-Tombs ran his first ever parkrun.

with Rushmoor not running this week we’ve elevated Dinton Pastures to a SJ regular as yet again it attracted a decent contingent of members. Carla Wright knocked nearly 3 minutes off her overall parkrun PB and Faye Joyner lowered her Dinton PB. Sue Hopkinson and Alurie Dutton sampled the course for the first time as Kate Parker volunteered as Tail Walker.

It’s holiday season so no surprise to see lots of Parkrun Tourism this week. Of those running their home venues; John Tovell ran at Crane Park, Yvette Glacken at Luton Wardown, Lisa Hale and Stuart Overhill ran at their second parkrun home Bushy Park where Lisa was just 1 second outside her fastest. Jon Green returned to his favourite Woodley where he recorded an outright PB.

Top 10 finishes for Robert Jerrett who took 7th place at the inaugural Higginson Park parkrun in Marlow and Neil Praine with 6th position at Homewood in a cracking 19:33. Down at Bournemouth Graham Robinson was narrowly edged into 2nd place on the same time as the first finisher. A pair of 4th places for Mark Fallowfield-Smith and Nikki Stanley at Upton Court as their recent Hen/Stag parkruns have rekindled the love of parkrun.

A trio of SJs made the trip to Wales with Philip Boylan and Kim Reeves running at Llanelli Coast and Stephen Casey bagging an impressive outright PB of 20:44 at Aberystwyth (he’s getting closer but still not quite a sub 4 minute mile).

Further afield Will Lucas ran at Seaton, Jane Pond at Kesgrave near Ipswitch, Simon and Anne Whillis at Leicester Victoria Park. Tina Acock wins the award for the furthest trip as she touristed at Constantia Greenbelt near Cape Town in South Africa.

Later on Saturday the superb beginners triathlon ‘Try A Tri’ was held in Yateley with a 200m swim in the pool at Yateley School, a bike lap of the Yateley 10k course and finally a 2.5km run. We’ll have a full report and results later in the week. In the meantime here’s some pictures:- 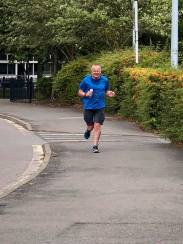 Caroline Cutliffe tackled the Mamore Gap half marathon in County Donegal on a challenging course with mountains and rain to contend with. 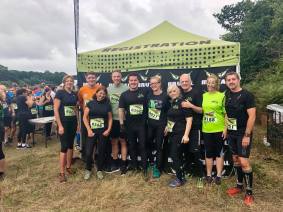 The SJ Strava club is growing and we now have 97 members logging runs on Strava. Lisa Hale combined speed with endurance banking over 80km to top the leaderboard. To take part in this just create a free Strava account and link it to the club in your profile. Here’s the top 10 from last week:-

Please let me know if I’ve missed anything and share your results and achievements in the future so the rest of the club know what you are up to. It’s also great to find out about new events or get an honest opinion on the multitude of events out there so we love to receive run reports. Any member, any event, any distance, any surface! Just email publicity@sandhurstjoggers.org.uk

As always keep a look out on Facebook for details of the weekday evening runs.

Monday: Patrick will be leading the Monday night chatfest from Sandhurst Sports Centre at 7:30pm. The route will cover approx. 6 miles and is very likely to be off road as its the height of bluebell season. This is one of the most sociable runs of the week and a great opportunity to catch up with friends or discuss the preceding weekend. And don’t forget the Monday Mantra ‘Mondays defo make me faster’.

Tuesday Club Run: The biggest club run of the week will as always offer multiple groups to cater for all abilities from beginners through to faster and more experienced runners. It’s perfect for novices and those coming back from injury or a long lay-off because you can start with an easy group and work your way upwards. The start time is 6:30pm as always, this week from Sandhurst Memorial Park.

Thursday: This week the threshold/improvers run will be off-road. This run is suitable for all abilities and as this run grows in popularity there are even more groups of varying speed to fit with your ability. There is also a shorter route and a sweeper to make sure nobody gets left behind. Meet at Sandhurst Sports Centre at 7:30pm.

Friday: Track is still free and the coaches have some great sessions planned for all abilities to improve fitness and technique. This is a great way to improve your running form and fitness, get faster and help prevent injury. If you’ve never ran on a track before give it a try, it’s a lot of fun and you are never more than 200m away from the start.

Saturday: Lots of members will be enjoying their weekly Parkrun fix at 9am on Saturday morning. Wherever you are parkrunning – Don’t forget your barcode!

Sunday: Check Facebook to find out who is running at The Lookout at 9am. It’s a flexible run to suit everybody’s needs and is either adapted to fit with distance targets or multiple groups are formed. The three ‘Cs’ of Coffee, cake and chat are enjoyed in the cafe post-run.

The Run Down is taking a week off for Bank Holiday and will return in September.